Or How a Bit of Expertise Saved the Day 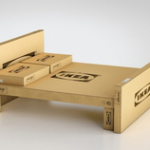 Okay, it wasn’t quite that exciting, but I received a call on Monday afternoon asking if I could possibly help. A customer had bought an IKEA bed, via Book My Space, which was duly delivered, but was having difficulties with the assembly, depite them having built an identical one before.

IKEA have changed the specifications, so that some fixings that were previously metal are now made from plastic, and these were breaking. Now, the plastic fittings are usually fine (and quite strong enough for the purpose) if you take a bit of care with them, but they aren’t very forgiving if you try to force them. What it amounted to in this case was that a little more expertise was needed.

I couldn’t attend straight away, so son had to sleep on a mattress on the floor for one night, but I could get there early Tuesday afternoon, which I duly did. Two hours later, one double bed and four storage drawers were assembled and in place, the IKEA mattress was doing its unrolling and inflating thing and I was on my way.

The trick with this one was that the double-ended pins used to join the headboard mustn’t be pushed in all the way, or the plastic cams will break when you try to turn them. You can feel when they’re in the right place, but only once you know. It’s that experience and expertise that I charge for, as much as my time.