With the pre-Christmas deadline passed and a flurry of shutter jobs completed, I had time recently to work on a job I had been putting off – refurbishing a dated kitchen, on a tight budget.

It involved a fair bit of tinkering and creativity. 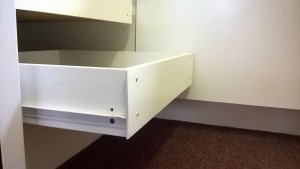 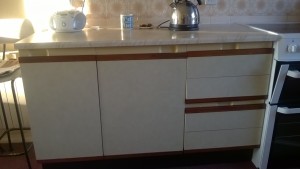 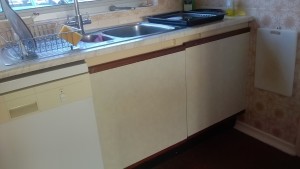 Due to the age of the kitchen – about thirty years – the heights of floor and base unit doors and drawers have all changed. The standard door height now is 715mm. Given the different cabinet widths in the existing kitchen as well, there were some decisions to be made about adapting the existing units to accommodate the new doors and drawer fronts. New doors and drawers now sit just beneath the worktop, rather than having a horizontal panel between them. 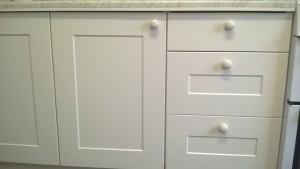 Even so, the bottoms of the new doors now project a few centimetres below the bottom shelf, though this isn’t noticeable until you open them and the overall effect is very smart.

We chose ivory coloured doors and drawers from B&Q as the sizes we needed were nearly all in stock (and others would arrive within a week).

We were okay with 400, 500 and 600mm base doors, 500mm drawer fronts and 600mm wall unit doors (taller than the floor units at 956mm). I used the doors from two “door and drawer” packs for the shorter 500mm doors above the cooker hood, leaving the drawer fronts spare for the time being. 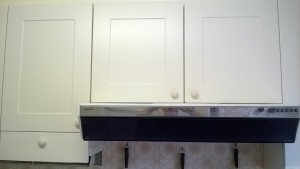 As the new 500mm drawer fronts are a set of three only, one of the four existing drawers is now hidden (a drawer within a drawer), with a much thinner drawer front added to stop it going in too far and falling off the runners at the back. Drawers had to be raised or lowered as well to accommodate the two deeper fronts and to make the hidden drawer idea work.

The only units I couldn’t cover easily with the new size doors were two 500mm wide wall units and a 600mm base drawer unit (see below). In the end I decided to buy two more 500mm standard doors for the wall units and add the spare drawer fronts below them. This still added up to less than the height of the wall units, so I cut a few cm of the bottom of the units and reattached the cabinet bottoms with dowels and screws. Then I made up two drawers and wooden runners from some handy scrap wood and attached the drawer fronts to these. 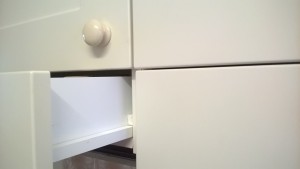 Getting the drawer fronts level and evenly spaced was tricky but the final result looks perfectly fine. 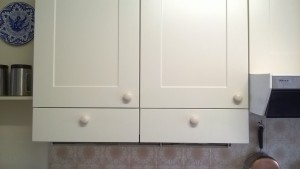 That 600mm base drawer unit had to be changed to a door and drawer unit, hiding three of the drawers behind the new door. To make this work I cut and rebuilt the drawers to make them narrow enough to clear the hinges, moved the runners back (with the right-hand runners now mounted on battens) and added thin drawer fronts to stop them being pushed in too far.

The runners on the bottom drawer were also moved nearer to the bottom edge of the drawer, to clear the bottom hinge.  As you can see, there is scope to make these drawers deeper, too. 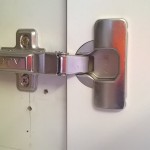 The old doors and drawer fronts were easy to remove, of course, and one stroke of luck was that screw holes for the new hinges aligned exactly with the old ones, 3.5cm from the front edge (making marking out easier), although every new hinge was higher or lower than the old one, so new pilot holes had to be drilled for all 28 of them. 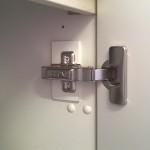 One door needed 3mm packing pieces behind the hinges to accommodate wall tiles. There was just enough adjustment in the hinges of the adjacent door to allow for this.

As well as the new soft-close hinges (a bargain from RB Next, ordered through Amazon), I also needed handles or knobs for every door and all the visible drawers. I got these at a bargain price online as well.

Although the doors are ivory in colour, the magnolia porcelain knobs I chose from The Handle Studio are a close enough match and look very smart. At just over a pound each when I ordered 20, I could afford to take a chance by buying online. 25mm screws were included, with quite a few spares. I measured carefully (twice) before drilling the 4mm holes for the handles, exactly 50mm from both edges for the doors and centrally, 50mm from the top edge for the drawers. 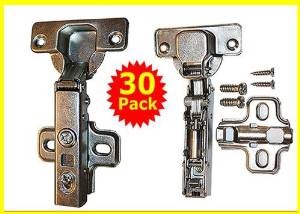 The hinges came supplied with not one, but two sets of screws – normal chipboard/wood screws and 5mm ‘euroscrews’.

I used the smaller ones on this occasion as all the screw holes would be new and secure, but the euroscrews would give a stronger fix if necessary. 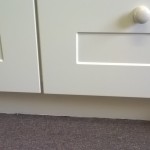 All that remains is to finish painting exposed parts of the cabinets to more or less match the new doors.

Ronseal’s cupboard paint (for melamine and wood), also in ivory, needs a few coats to cover the black kickboards and darker beige end and top panels.

Total cost for parts and materials for 15 cabinets in all was about £400. It took about two days in total, not allowing for paint-drying time.